You have an interface and multiple implementers of that interface. You want to test all those implementing classes using the same tests. And you do not want to repeat yourself. That would be … like … Gah!

Using a unit test framework like NUnit that is a breeze.

You write the tests once. Using a reference to the interface in all of them. And then you tell your test runner to run these tests for every class that implements it. This way you test all these classes against the contract of the interface. Contract testing, pure and simple.

Any implementer of the IJointer interface needs to honor the following contract for the MakeDoveTailJoint method:

Once you know how to do it for one of these contract requirements, you can easily extend this to the others, so for brevity’s sake let’s focus on “Should return non-null reference to a DoveTailJoint when no exceptions are thrown”. The method to check this behavior would be something like:

Using NUnit, you can very simply do this by declaring a generic test class and constraining it so it can only be used for (types deriving from) IJointer:

The new() constraint on the class declaration enables you to create new instances of T. Without it, the compiler complains with the error message “Cannot create an instance of the variable type ‘T’ because it does not have the new() constraint” on the return new T(); line.

Now that you have a generic test class that can create a reference to IJointer, you still need to tell NUnit to run all the test methods in this class for every class implementing the IJointer interface.

With NUnit, that is as easy as adding an attribute to the test class: 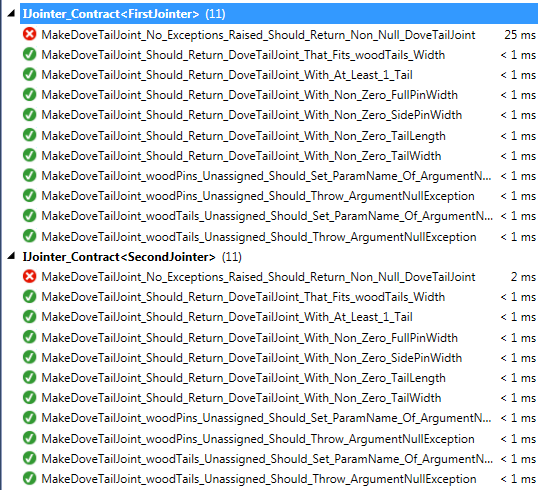 Yeah, I know, the test fails… The Jointer classes still only satisfy the compiler by having return null; as their implementation for the MakeDoveTailJoint method. The other tests succeed only because the tests themselves are not yet implemented. See my moan about this in How to test a class hierarchy without repeating yourself.