Self-organization doesn’t happen by itself

Have you ever been told: “We are going to be agile. And we’ll follow SCRUM from now on.”? Maybe you have been lucky and had a day’s worth of training on the SCRUM framework. So you know that SCRUM teams are self-organizing and nobody tells them how to do their work, they get to decide that for themselves.

But self-organization doesn’t happen just because you tell people that they are now in a self-organizing team.

Everybody has to adjust. Team members need to gain the skills and the confidence to make decisions and the (former) managers needs to find the confidence and the trust to let go off control s/he thought s/he had. And it isn’t easy to allow others to decide when you are still the one held responsible by the rest of the organisation.

Fortunately, the transition to self-organization does not need to be all or nothing, nor instantaneous. You can do it slowly, area by area, as both manager and team members gain confidence in the new way of doing things.

A great tool for this is what Management 3.0 (amongst others?) calls a delegation board and an exercise called delegation poker.

The idea is to list all areas in which decisions need to be made: tools to use, vacation days, processes, team membership, working on location or remote, who can work on what. In a sense anything and everything to do with running a software development team. Though I’d advice to start with the simple stuff and only add more complex areas as a team grows its self-organizational skills.

For each of the areas up for delegation from manager to team, you then decide what level of delegation you want to see.

The delegation levels range from “I decide and tell my people what needs to be done by whom, by when and how to do it” to “my people have full delegated authority”. Specifically:

To decide the levels, you can play delegation poker. It’s like a story point poker for an item on the backlog. You all discuss what the delegation level should be and then everyone involved throws a poker card with the level they want.

While everyone gets a vote, the person ultimately responsible for a team’s performance (the manager) is the only one who gets to decide what the delegation level will be. 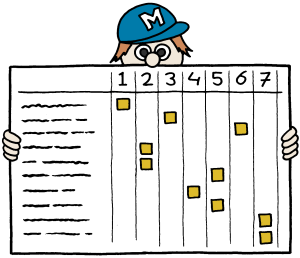 It’s also important to remember that delegation levels are not set in stone. As a team gets more skilled in self-organization, delegation levels can go up. So do consider playing the delegation poker game regularly. For example every couple of sprints.